We’re “beary” glad you’re here to discover some bear facts for kids that you can share with the little ones in your life!

Whether it’s a school lesson, preschool circle time, a visit to the zoo, a family book at home, or even a favorite stuffed animal, the topic of bears sparks curiosity and conversation.

One of our favorite sources of animal facts, including bear facts, is this adorable Wild Animal Babies book by the creator of Preschool Inspirations! It is suitable for all ages and combines fun animal facts with charming illustrations.  Children will delight in seeing baby animals interact with their parents and siblings in their natural habitats while they also learn the alphabet.

If you’ll “bear” with us, here are some jokes to get us started!

Q: What do you call a bear with no teeth?

Now onto some bear facts for preschoolers and kids! 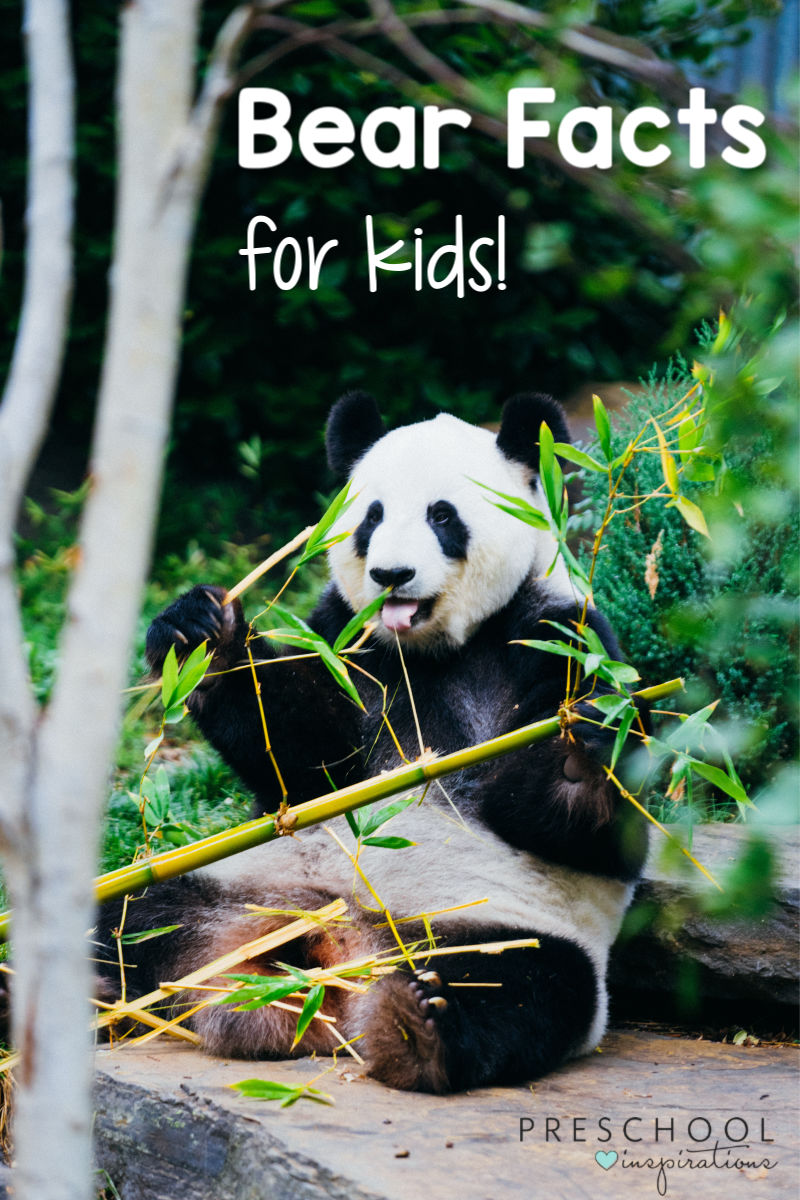 All bears – except for polar bears and Giant Pandas – are omnivores (eating both meat and plants).  Their diets depend upon where they live.

Brown bears, black bears, and polar bears hibernate in the winter for about 100 days.  They make dens or shelters in caves, logs, the sides of hills, and in ice banks.

Except for mother bears with their cubs, bears are solitary animals, meaning that they live alone.

Bears are territorial, meaning that they will fight other bears in order to protect and keep their own land.  Bears will find food, shelter, and mates in this territory.

All bears have an excellent sense of smell, allowing them to sniff out food, mates, and their cubs (baby bears).

Most bears have two layers of fur. One layer is short and close to the skin to keep them warm. The outer, longer layer is to keep them dry while swimming.

Though bears are large animals, they can run very fast, reaching speeds of up to 35 miles per hour. 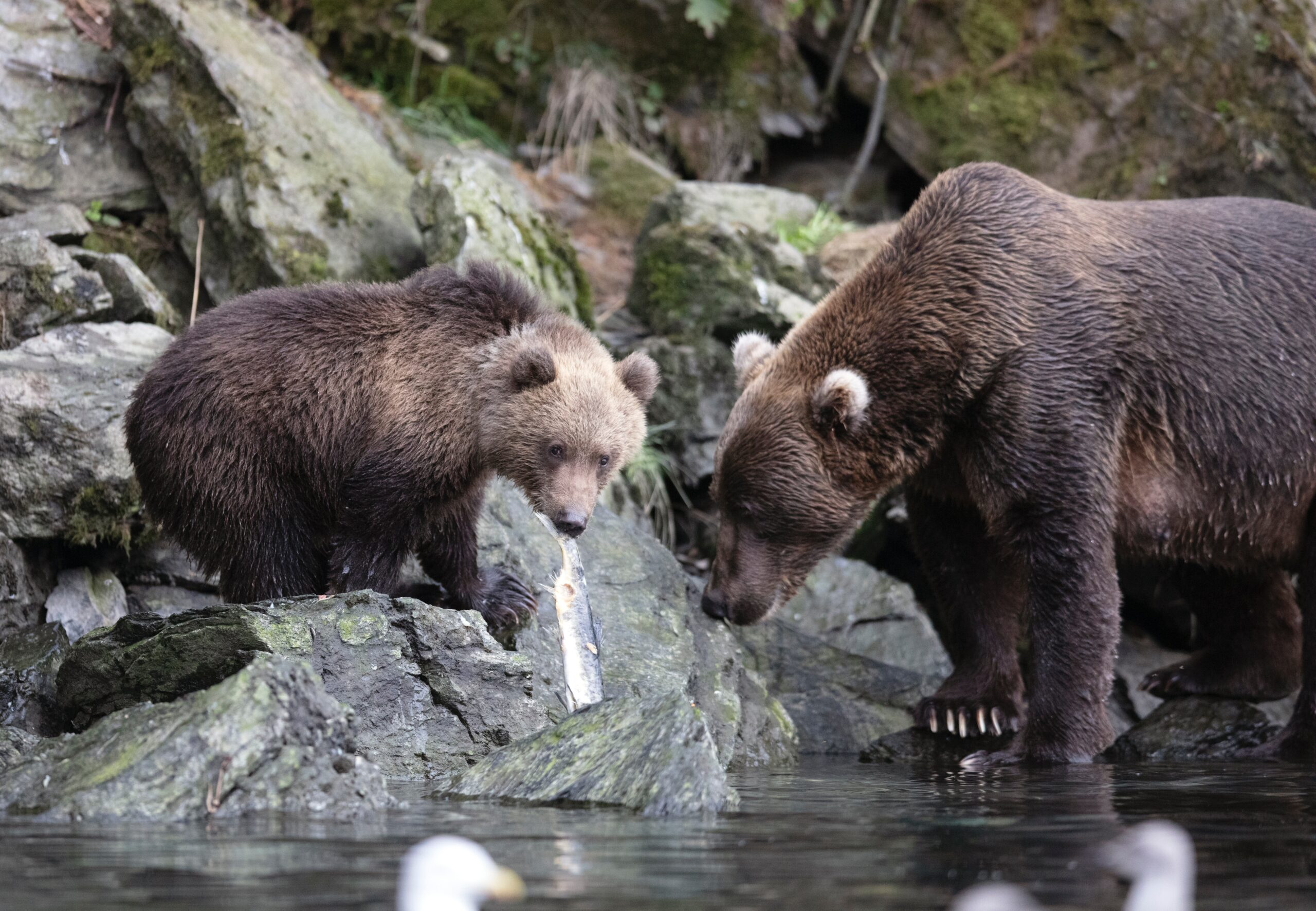 Brown bears live in northwestern North America and throughout Europe and Asia.

Female brown bears give birth in their dens during the winter. They usually have two cubs at a time.

The cubs are born about the size of a chipmunk. At birth, they are blind and naked. They drink their mother’s milk until spring, when they have grown large enough to come out of the den.

In the Alaskan springtime, salmon (a favorite food of brown bears) swim upstream in large numbers. Brown bears often get into dangerous fights over salmon-rich territories. 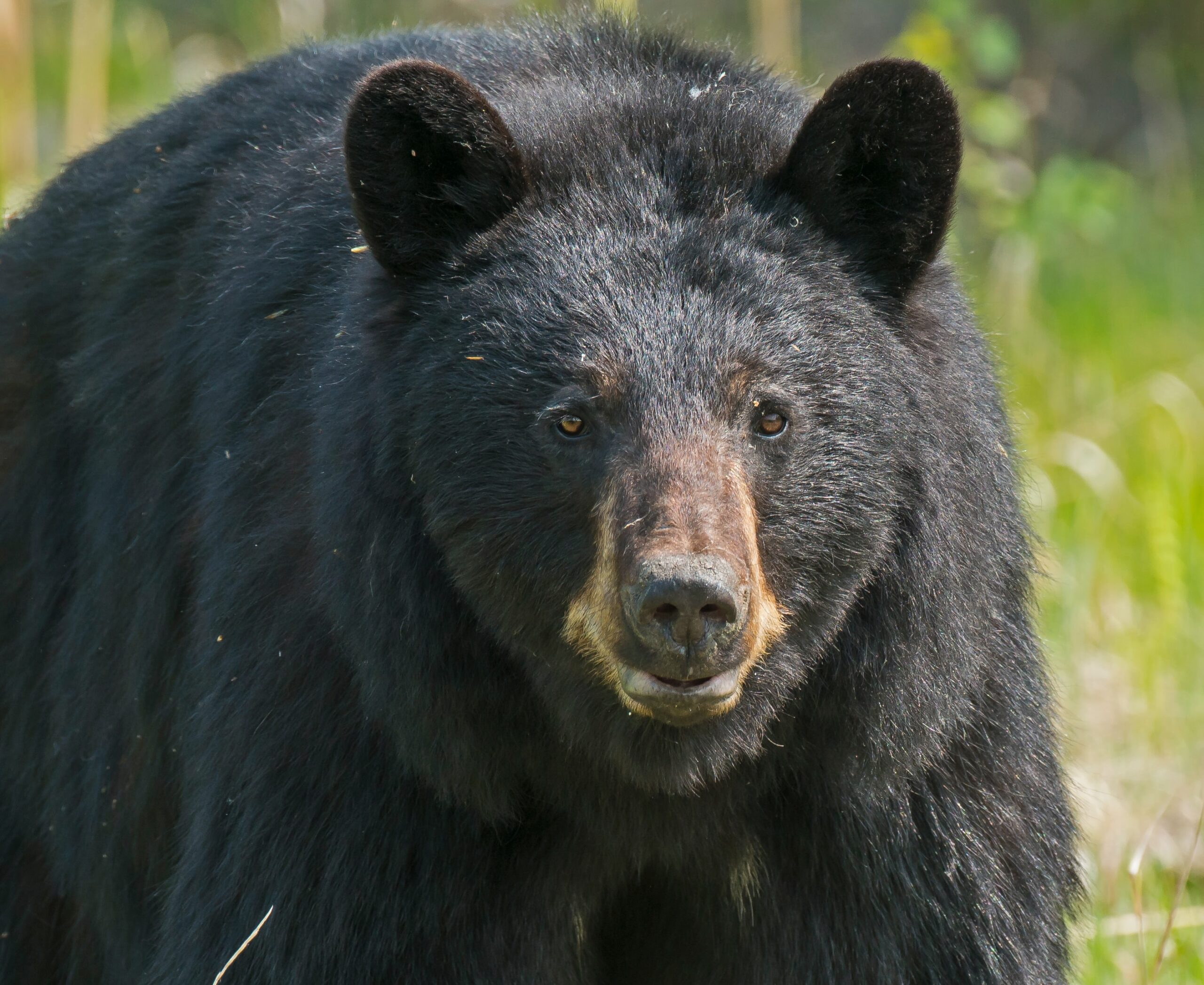 North American black bears prefer to live in heavily-forested areas in the mountains. They range from Canada to Mexico.

Males prefer territories and will roam great distances, but they do not defend these territories.

Black bears are omnivores but eat mostly plants, fruit, and nuts.  They will, however, eat human food and garbage which is why signs are posted at campgrounds and in towns near their habitats.

Cubs stay with their mothers for 2 years so they can learn to hunt and how to survive.

Asiatic black bears live in the Middle East and across the Himalayan Mountains.

These bears often have a crescent-shaped white patch on their chests.  This is why they are also called moon bears.

They can walk on either 2 or 4 legs.  They will often walk for long distances on 2 legs to scare competitors or predators like tigers, wolves, or brown bears.

Asiatic black bears are nocturnal and do not have a good sense of eyesight or hearing, but they have a great sense of smell.

These bears have black skin and translucent (or clear) fur.  Their fur looks white because of the light’s reflection off the snow and ice.

Polar bears are the largest of all bears.  Male polar bears can weigh as much as 10 men!

Polar bears are carnivores (meat-eaters), and they feed on seals.  They wait by holes in the thick ice for seals to come up for air.  Polar bears can smell seals from miles away, even when the seals are under the water or ice.

They can swim for long distances for many hours at a time.  Polar bears will sometimes hunt seals by swimming beneath the ice.

Can you “bear” another bear joke?

Q:  Where do polar bears keep their money?
A:  In ice banks. 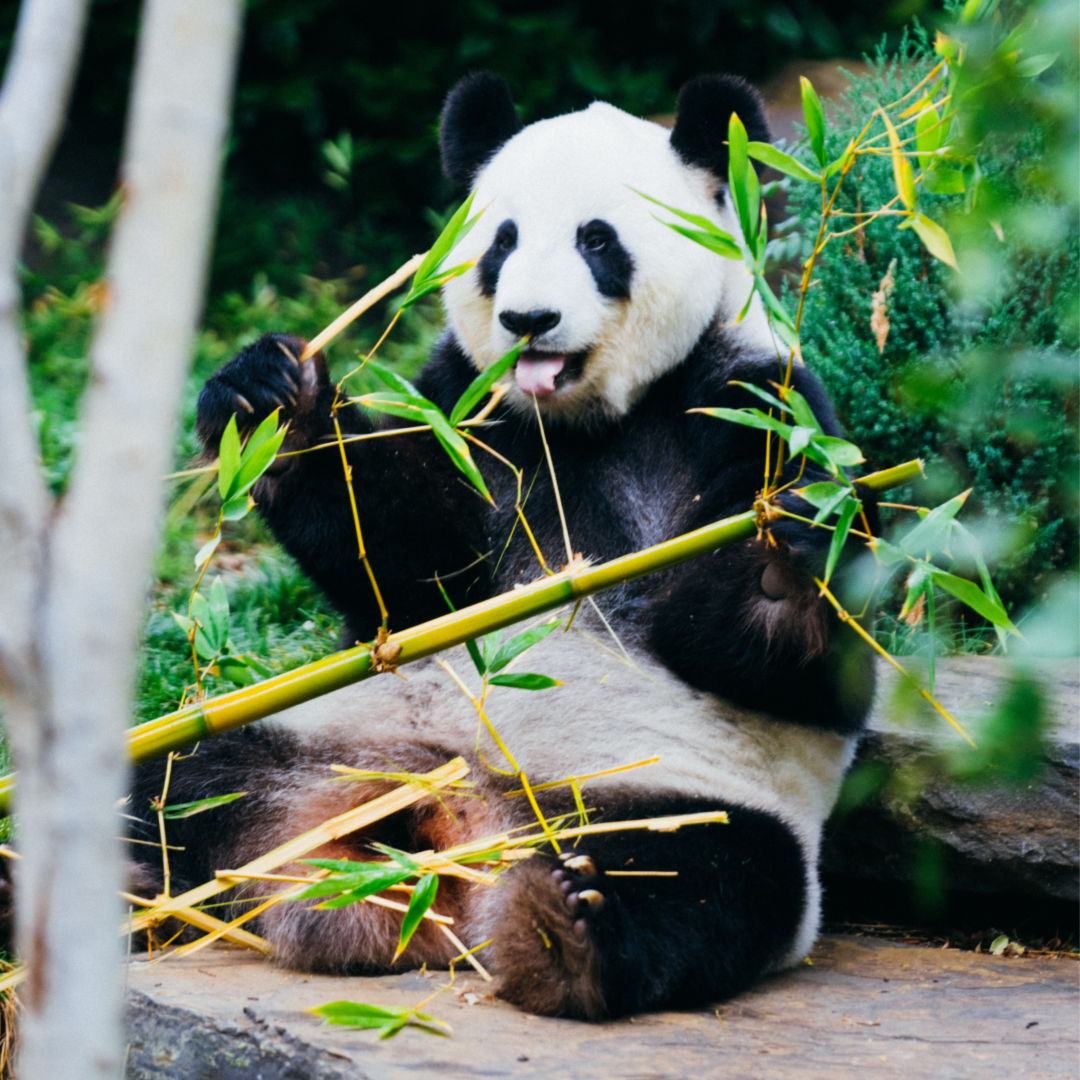 Giant Pandas live in the rainy mountain forests of China, and they like to climb very high in trees.

These beautiful bears are herbivores (plant-eaters), and exclusively eat bamboo (a woody reed).  They eat for up to 14 hours each day because they digest bamboo very quickly, and bamboo does not fill them up.

Male pandas sometimes do handstands next to trees to relax.

They are not shy and will venture into nearby villages and towns.

They spend most of their time hanging out in trees.

Sloth bears have dark, shaggy fur with a white ‘V’ or ‘Y’ marking on their chests. Found in the tropical regions of Asia, a single layer of fur keeps them cool and wards off insects.

Sloth bears usually search for food at night. They feed mainly on ants and termites, using their sharp, curved claws to dig away at mounds and then suck insects up through a gap in their front teeth. Sloth bears also enjoy eating fruit.

Sloth bears are noisy and like to grunt and snort.

Unlike other bears, cubs often ride on their mothers’ backs. 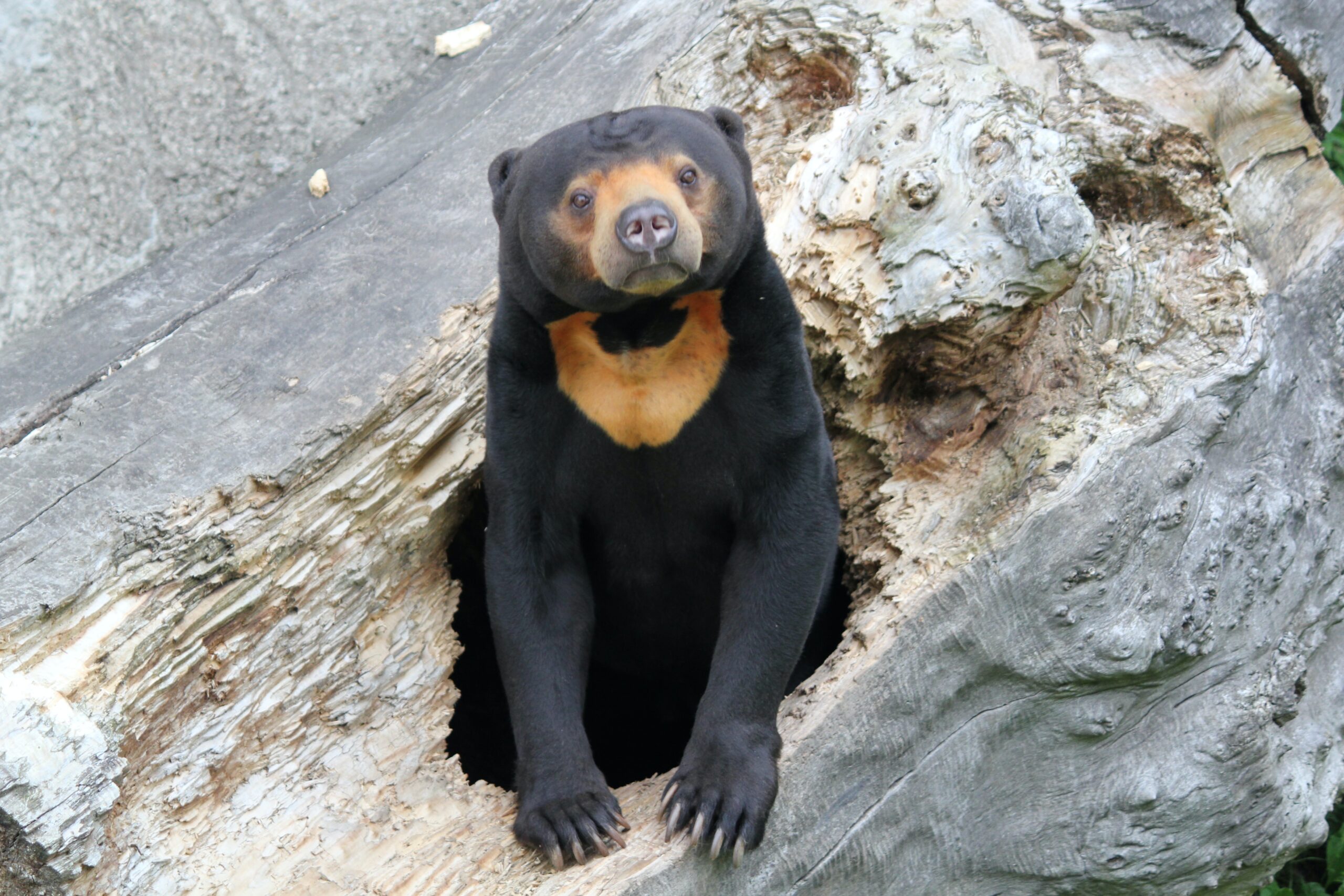 Sun bears are the smallest bears, and they live in the tropical forests of southeast Asia.

The sun bear gets its name from the horseshoe marking on its chest, which looks like a rising or setting sun.

Sun bears have very long tongues, and these are useful for licking honey out of beehives.

Spectacled bears are named for the white or yellow rings around their eyes that look like spectacles, or glasses.

They are also called Andean bears because they live in the Andes Mountains of South America.

Spectacled bears are very shy and climb very high in trees to be alone.

They have been known to make platforms in trees out of branches just to wait there for days for fruit to ripen.

We hope that you loved these bear facts for kids, and learning more about the 8 different types of bears!  If you and your kids are hungry for more animal information, check out these other posts. 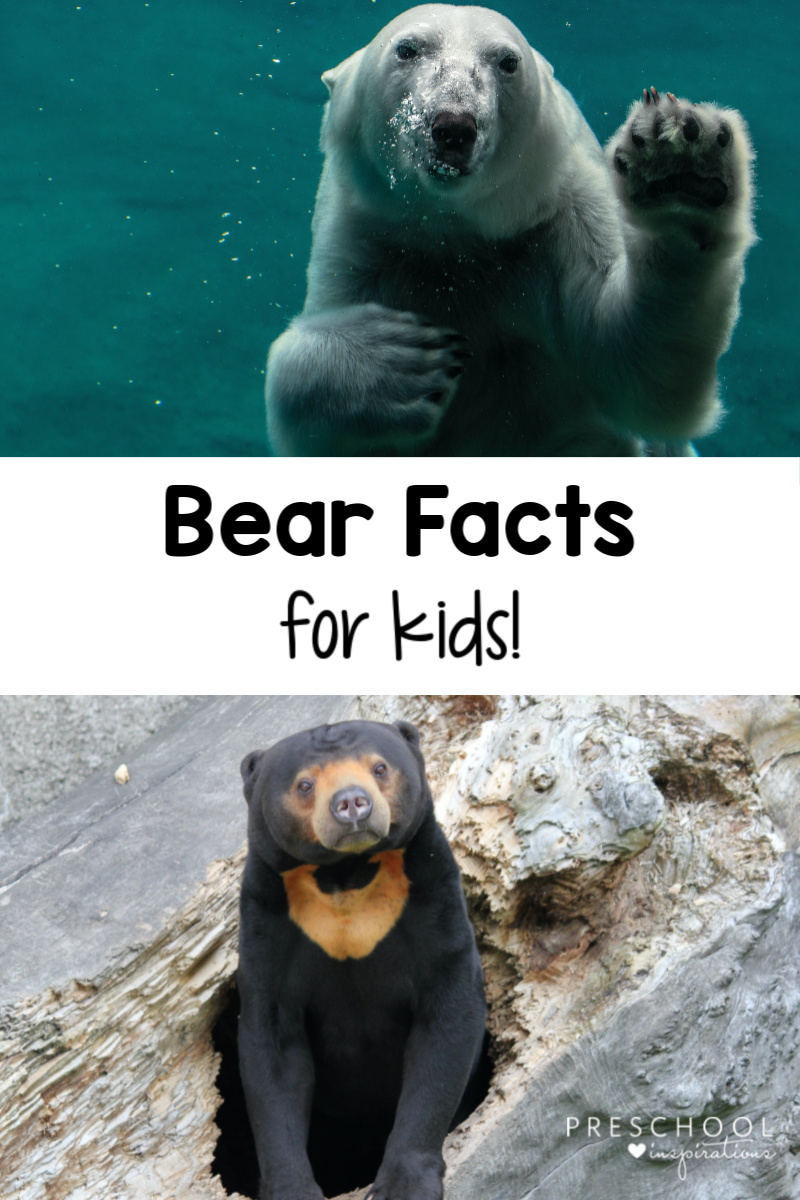 Brittany Moran
Brittany Moran is an educator, budding blogger, coffee addict, and lover of life who strives to combine her Midwestern work ethic with practical and simple living strategies in order to help as many people as possible.This Jill of All Trades is married to her college sweetheart, and they have two amazing daughters who keep them on their toes.She believes that every day is a precious gift and appreciates the continued opportunity to learn, grow, and laugh.