“I’m so sick of people telling Sam pink is a ‘girl color’”, my friend, Heather, lamented recently. “He went to pick out his soccer cleats today and was about to pick the pink ones until the store employee told him they were for girls. I’ve always told Sam, ‘There is no such thing as boy colors and girl colors. There is only color. People can choose to like any color they want’. But it’s confusing to him because so many people keep sending the opposite message.”

Her dilemma made me think of the many times I too had felt the presence of these color-coded assumptions about gender. How I’d seen it many times since I became a mom of two girls. How it had started innocently enough with baby gifts in fifty shades of pink. How some people had frowned when I dressed them in hand-me-down clothes from their older, male cousin. And then, just the other day, how my 6-year-old daughter had refused to wear her navy-blue winter coat, declaring that “blue is a boy color.”

Where did “boy colors” and “girl colors” come from?

Our focus on the color of children’s clothing is so ingrained that it may seem like a law of nature. Even Heather admits that it can be really hard to defy gender norms, even when you’re aware that the bias exists and disagree with it. Once, she steered her son away from a bright puffy pink coat that he had picked out because she was worried that he’d get ridiculed. Instead, they left the store with a plain old blue and gray coat. “I still feel slightly guilty about it,” she says about the incident, which happened three years ago.

In fact, the norm that tells us what colors boys and girls should wear is only about a hundred years old.  Back then boys wore pink, whereas girls were supposed to wear what was considered the more “delicate” color, blue. For centuries, up until World War I, children wore white, dainty dresses until they turned six. This was regardless of their gender, according to Jo B. Paoletti, a historian at the University of Maryland and author of Pink and Blue: Telling the Girls From the Boys in America. At that age they typically also had their first haircut.

Paoletti mainly attributes the current trend of assigning gender-specific colors to everything from diapers and clothing to toys and strollers to two things: the advent of prenatal testing, which enabled parents to find out the gender of their unborn baby ahead of time, and the commercialization of childhood. All parents may not appreciate gender-coded marketing, but the reality is that it’s very profitable for the companies that produce the merchandise. Even children, who typically don’t become conscious of their own gender until age 3 or 4, “are the subjects of sophisticated and pervasive advertising that tends to reinforce social conventions,” according to Paoletti.

Worrying about what colors boys and girls wear may seem like a classic first-world problem. Some may not even consider it an issue at all, considering that boys and girls ARE undeniably biologically different. But children are not genetically predisposed to prefer pink or blue based on their gender; that’s a behavior that they’re cultured into. As a parent, that makes me question what other behaviors my daughters are learning as a result of adults’ expectations, solely based on their gender.

Beyond “boy colors” and “girl colors”

I think of this often, because people are often surprised to see my girls fearlessly scale a tree or roughhouse in the woods, simply because they’re girls. “Wow, your girls are really adventurous!” a man in his fifties once told me, after watching my girls build a fort with some hay bales and old tools in his barn. “I would’ve expected that from boys, but not from girls.”

His comment stuck with me, because it reminded me of the fact that even though we’ve made big strides in closing the gender gap in recent years, we have a long way to go. And it never was just about the blue and pink. If my girls are not expected to wear certain colors or play a certain way today, just because they’re girls, what else will society expect from them tomorrow? That they won’t be interested in technology or capable of fixing a flat tire? That they won’t have what it takes to become leaders in their community or run a Fortune 500 company? The bias naturally goes both ways, limiting boys to their prescribed roles as well.

Heather’s son Sam didn’t choose the pink soccer cleats that day. But if we can all stop placing children in boxes based on their gender, maybe the next generation of boys will. And their moms won’t have to worry that they’ll be ridiculed. 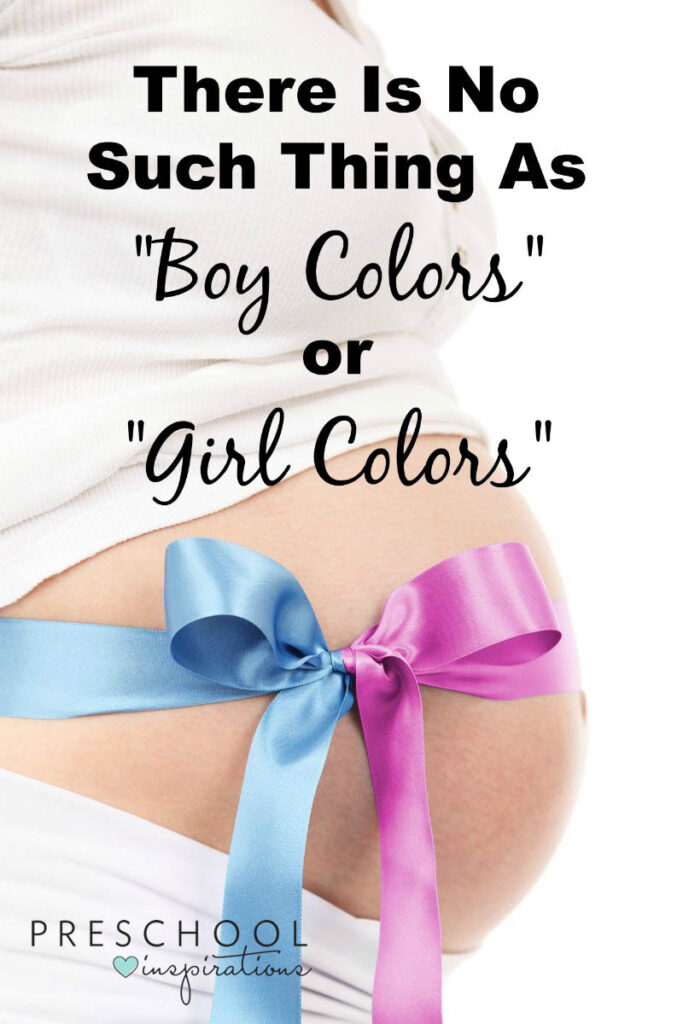