Meltdowns have no boundaries. They happen in any place: at home, in school, the store, restaurants, airplanes, birthday parties, appointments… you name a place and it’s a candidate. I’m no stranger to meltdowns. After teaching young children and having two of my own, I see them on a regular basis. The honest truth is that they still make me cringe. I don’t bat an eye at a siren or other loud noises, but I will never get used to a meltdown. They are what I call the “not so perfect storm.” 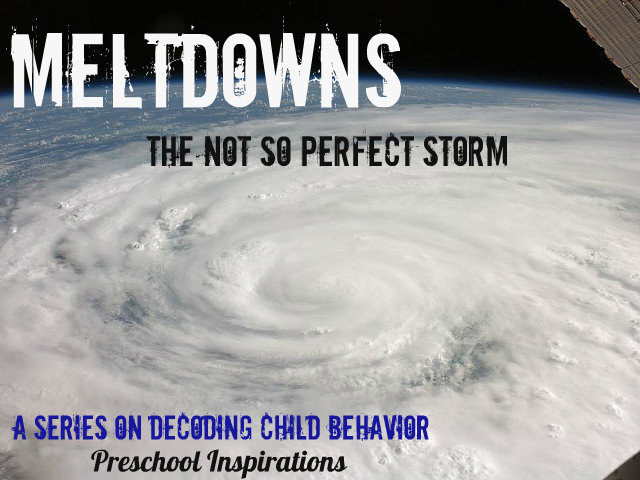 Meltdowns make me think of storms because of the similarities that the two can display: intensity, violence, chaos, uncertainty, panic, and certainly damage. I call them the “not so perfect storm” because they can happen anywhere, anytime, and don’t need the “perfect storm conditions.” Meltdowns come in different shapes and sizes, depending on the child. However, there are four different types of meltdowns that I see most frequently.

Unpredictable meltdowns are a volcano. Here you think you’re just walking along a mountain when before you know it, it’s erupting and spewing. Some children “store up” their emotions and then one small incident will trigger the volcanic eruption. Oftentimes this happens days after the big culprit.

Have you asked a child a simple question or given them a simple request and then received a full-fledged emotional breakdown in response? Chances are that your actual words are just a small part of this process. Think back to the past couple of days. Have there been changes in the routine? Is your child starting something new? Are there stressful situations going on? These all contribute to the volcano.

When I think of a tornado meltdown, I think of children who get violent. They will throw chairs, harm their own body, knock objects over, damage furniture, and possibly hurt others as well. These meltdowns are intense and have little notice before they take place. They are caught up in the whirlwind of emotions and often times can’t be talked down. In fact, talking to them can even make it worse. Once the meltdown is over, their body has just gone through an incredible workout, and they’ve possibly shown some “super strength” that you  didn’t even know they had.

One of the biggest tornado meltdowns I witnessed was several years ago when one of my students was dealing with her father being ripped out of her life unexpectedly. At the age of three, she could pick up a chair and throw it clear across the classroom. Her anger and rage were a cry of desperation, and I felt helpless as a new teacher as I had no idea how to calm her.

A hurricane is a meltdown that can be spotted a bit in advance. You can see factors playing out that are putting the child on edge. At times they show simple body motions to imply that they are getting upset. Sometimes the hurricane can be diffused and fizzle out with a responsive adult. Otherwise, they grow stronger and stronger with other incidents or triggers that come up. Even a medical condition can be a contributing factor.

We went through “meltdown hurricane season” in our home for almost a full year. One of my children had constipation, and it was an incredibly vicious cycle. Each day presented itself with so  many struggles. Once the relief would come, we could stop walking on egg shells… for a couple of days. Then the tell-tale signs would show up again until the issue was fully resolved. I am so glad to say that hurricanes are a pretty rare occurrence now.

This is the mildest of meltdowns, although all meltdowns are intense in my opinion. Rainstorms represents the children who are not angry. They are upset. Whether they are afraid, sad, or overwhelmed, the water works start. Sometimes it seems that someone pushed a sprinkler button inside of them because it takes no time at all for the tears and emotions to flow.

My own daughter had lots of rainstorms. When she was one and two years old, if we walked into an unfamiliar building, the storm began. I had no clue what overwhelmed her, but she just cried and cried. Birthday party invites quickly became a point of stress for me. I could risk going with the possibility that she would like it, or I would spend 20-30 calming her down. She eventually grew out of this, and we are happy to report that birthday parties are exciting once again for all of us!

The Making of a Storm

I used to believe that meltdowns were all just power struggles, and if the adult exerted enough authority, the child would figure it out. There are incidents like that, and honestly those aren’t quite as complicated as a full-blown meltdown.Those moments are overwhelming and embarrassing too! To sum it up though, a power struggle can be worked through with boundaries, healthy routines, and consistency. Meltdowns are continual and intense despite those efforts.

Storms dig deep inside the emotions, mind, and body of a child. My own most successful way of handling these storms is to find the underlying reason for the meltdowns. Here are some reasons behind storms that I have seen (which is by no means an all-inclusive list):

There have been many changes in a child’s life
A loved one is suddenly gone
A child is being pressured to do something he finds stressful
There is an anxiety trigger from a fear
A medical condition exists
The child is chronically over-tired
A child is suffering from an unknown (or known) allergy
There is too much stimulation around the child (i.e. too many noises or people who are too close to the child)
Attending an event with too much spontaneity
Going to an unfamiliar place
A child feels overwhelmed by something in the environment and the ability to reason becomes temporarily hindered
There is a lack of stability and predictability in the daily routine
A child has sensory sensitivities or Sensory Processing Disorder

Some children learn to cope with these issues through time, and other times, major sacrifices might need to be made. That could look like a medical diagnosis, a change of diet, or even moving to a different climate. Several of the items I listed above can be attributed to a condition known as Sensory Processing Disorder, which can be determined  after an evaluation by an Occupational Therapist.

Each child can be a mystery, and it could take months or years to figure out. Sometimes we do not ever know the cause. I talked with a dear friend the other day, and she shared about a young family member who was having horrible meltdowns. After time and some deep digging, they discovered that he was having seizures. Thankfully there were able to help this little guy once they figured out the problem, and he’s living without the meltdowns. I wish that every family was able to pinpoint the reason, but I know that in reality, it may never be uncovered.

How to Manage During the Storm

Lastly, I want to give you some resources to help in the path of a storm. As a parent I am immediately horrified and embarrassed during a storm. I start to question my parenting techniques, and if I am anywhere near people, I want to crawl in a corner and hide. As a teacher I am able to step outside of my emotions and fears and start considering the classroom environment and updates from the parents to best meet the needs of the child. I keep calm, remove any known factors that are contributing to the meltdown (if possible), and try to find a way to deescalate the surge of emotions. I use many of the techniques and objects in this post with 10 “Sensory Hacks to Calm an Angry Child” by Lemon Lime Adventures.

The month of October is Sensory Awareness month, and it is a huge reason why I decided to write about this topic. It is one of many posts in a series about decoding everyday kid behaviors. To read more common yet difficult child behaviors and to see the rest of the topics in this series, you can visit Lemon Lime Adventures. Please keep in mind that I am not giving medical advice or offering solutions. I am sharing my own resources and experiences as a mom who has been there in the midst of the chaos and also as a teacher who has seen over a decade worth of behaviors and has advocated on the behalf of many children.