Slime is so inviting and calming. It’s a play recipe I’ve used for years with my preschool classes and my own children. We love to make new slime recipes for holidays, seasons, and themes.

And now I’ve compiled some of the absolute best slime recipes. Here is a year of slime recipes that you and your children or class can explore together. 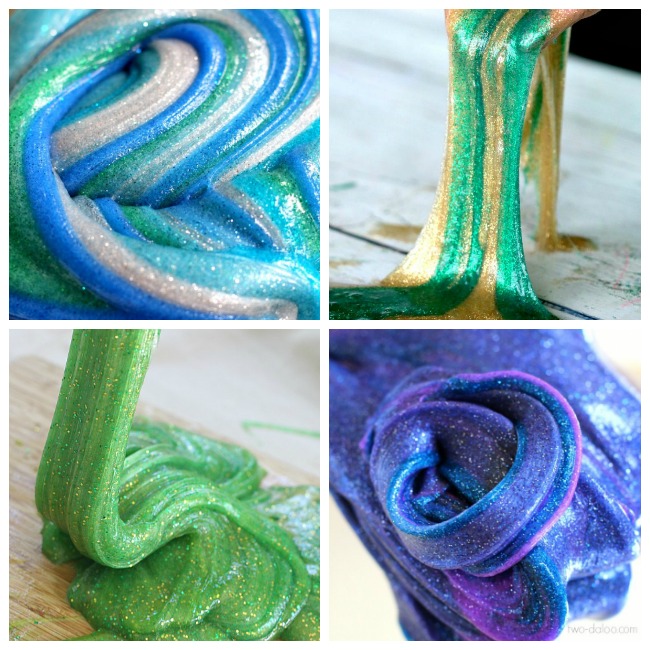 A Year of Slime Recipes

These slime recipes are awesome and all made of different components, and you can feel free to choose your favorite slime recipe and just add the “mix-ins” from the ideas below.

As with all play recipes, supervision is needed. Slime is formed from chemical reactions. Do not make slime with children who may want to eat it. If you want a recipe that works time and time again, here is my perfect slime recipe. It also explains how to fix slime that is too hard or too sticky! It is the gorgeous blue slime pictured below in the collage.

My favorite glue to use is Elmer’s clear glue because it works the first time, and it gives the best color (in my opinion of course)! 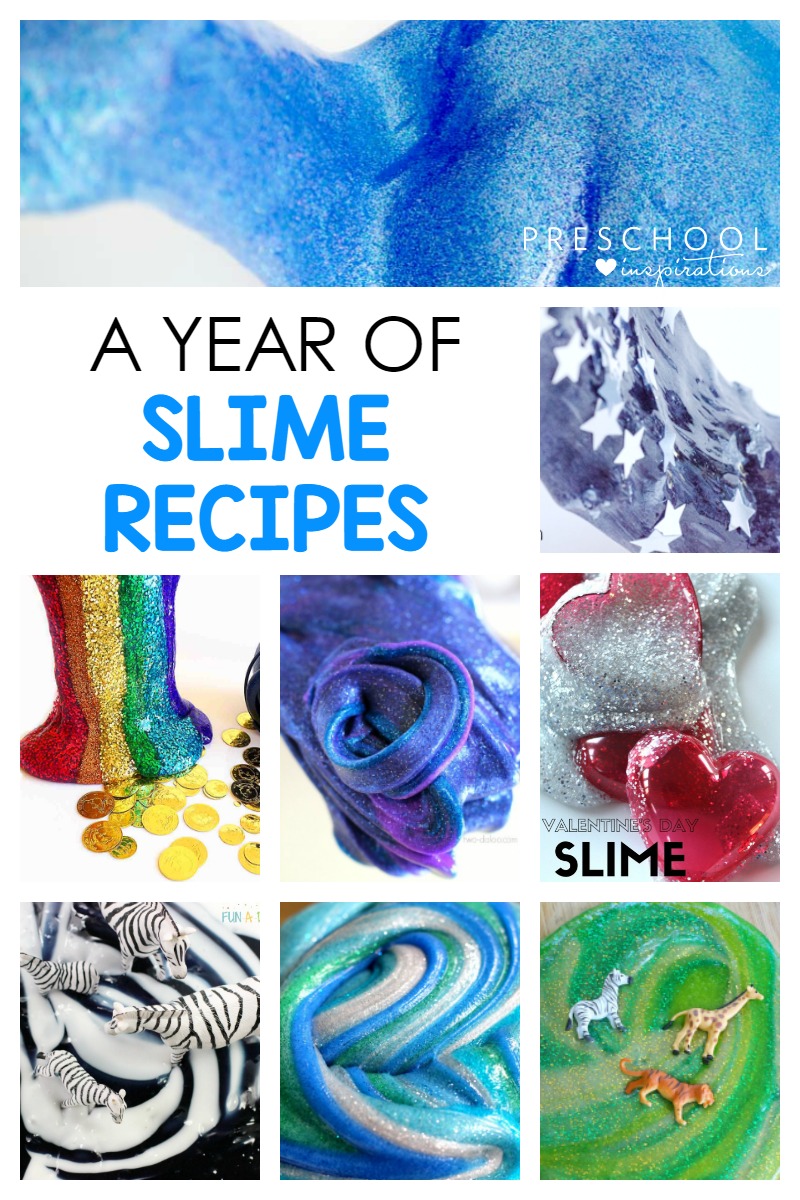 Party Slime | Left Brain Craft Brain If you have a slime girl or slime boy, have you thought about having a slime party? This party slime is an absolute must! It is so full of colors and shine, it will be a hit for sure!

Silver & Gold Slime | Fun-a-Day This Silver and Gold Slime makes me thing of a king and a queen. Let your little ones feel like royalty for a day with this super shimmery slime.

Red Hots Slime | Lemon Lime Adventures (pictured)
Red Hots are one of my favorite Valentine candies. They sizzle when they hit your tongue just like this Red Hots Slime will when you make it with your kids for a fabulous sensory activity!

Heart Slime | Little Bins for Little Hands
You can easily convert a slime recipe into a Valentine’s day theme by adding super fun and sweet heart confetti. How fun is this slime?

Pink Glitter Slime
Slime is fun but glitter slime is absolutely mesmerizing. If you have a glitter lover, they will love this Valentine’s Day glitter slime!

Glitter & Heart Slime
Confetti is a perfect addition to slime as that can be seen in this sparkly Valentine’s Day slime. This would be a wonderful extra to go with a Valentine’s Card!

Green Calming Glitter Slime
Slime can be unbelievably calming for any day of the year, but this one is perfect for St. Patrick’s Day!

Gold Slime (pictured)
Gold is a symbol of luck for St. Patrick’s Day and this gold slime will make kids feel lucky as can be.

Pot O Gold Slime
A pot of gold coins is nice, but a pot of gold slime is even better. This would be the perfect treat from a leprechaun!

Shamrock Slime
Gold and Green are the fabulous colors of St. Patrick’s Day. This slime is chalked full of festive sequins that shine and make this sensory activity even more eye catching!

Rainbow Slime  (pictured)
Rainbows are iconic for St. Patrick’s Day. This rainbow slime is not only sparkly but the colors are incredibly rich and beautiful.

Rainbow Slime
This rainbow slime looks like the perfect sensory play. These colors and this slime make me want to squeeze it and let it ooze out my fingers!

Rainbow Slime
I love how this colorful rainbow slime is also slightly translucent. This makes for a totally different experience than other slime recipes.

1 Ingredient Rainbow Slime
Did you know that slime can sometimes be made with only one ingredient? This Rainbow Slime Recipe is looks so fun to make!

Easter Confetti Slime
Not all slime has to be overly complicated. This super fun Easter Slime adds Easter shaped confetti and makes a fantastic themed

Easter Slime with Easter Eggs
Another fun way to switch up a slime sensory activity is to add large pieces to the slime. In this recipe, the add in is big chunky Easter eggs which looks incredibly fun!

Easter Peeps Slime
Peeps are a delicious treat, but they also can make a fun sensory activity. I love that the texture looks different than most slime recipes too!

Easter Chick Slime
You don’t always have to mix anything in to give slime a theme. This fun chick slime may look like typical slime until you put it in a jar dressed as a chick!

July 4th Slime
Red White and Blue are the core of this slime that reminds me of fireworks on an Independence Day night!

4th of July Slime
This 4th of July slime recipe looks so fun and resembles the American flag with a little touch of sparkle!

Fall Confetti Slime Recipe
This slime is the perfect way to ring in the Fall season. The chunky fall colored glitter is

Pumpkin Slime
We already know that the inside of a pumpkin is slimey and gooey and this sensory play is no different. Once you add the seeds, will you even be able to tell the difference?

Spider Slime
Spiders are quintessential Halloween spook. This slime is anything but spooky, unless you want it to be. I love that the slime it self takes on the aspect of the spider webs while the plastic spiders climb through!

Pumpkin Gut Slime (pictured)
Pumpkin guts are always slimey but they get even slimier when you add them to a traditional slime recipe. This is perfect for sensory loving kids!

Creepy Crawly Slime
If your kids love creepy crawly bugs, this slime is for them! It is easy to make and the perfect way to fill up your bug loving kids’ bucket!

Ghost Slime
This is the coolest ghost I have ever seen! Plus it is absolutely SO easy to make slime into ghost slime! 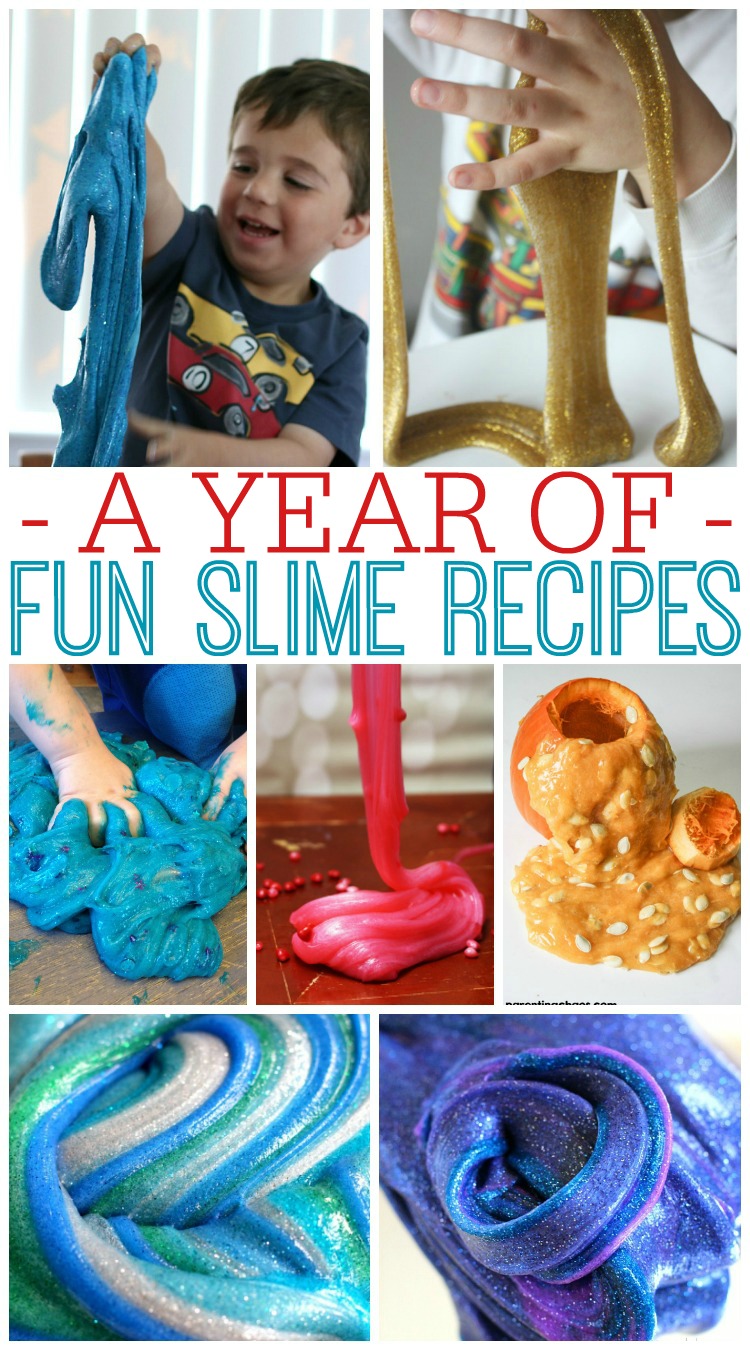 Gingerbread Slime
This is a fun invitation to create with slime activity. Kids will enjoy the sensory aspect with the slime, but with all the extra goodies they will be creating gingerbread men over and over!

Peppermint Slime
Peppermint is my favorite flavor and scent for the weeks surrounding Christmas. Even kids who are not typically interested in messy play loved this Peppermint slime recipe.

Candy Cane Slime
If you walk the streets during the Christmas season you are bound to see at least a few candy canes. This slime mimics this fun Christmas symbol and is the perfect way to add festiveness to your sensory play!

Snowflake Slime
Playing in the snow is fun, but some kids don’t like being cold so this slime recipe is the perfect way to get fun hands on winter play without having to be outside!

Snow Slime
The texture of this snow slime is the perfect addition to a arctic animal sensory bin. Bring the cold weather animal friends and let your kids play with their imagination and this ‘snow’.

Snow Slime
Did you know that slime will freeze? I did not and from the looks of this it is one activity that I need to try ASAP!

Arctic Slime
I love the different colors and textures that each part of this slime activity have. This is an excellent activity to encourage children to learn the different areas of the Arctic!

Snowflake Glitter Slime
Have you seen snow fall in the moonlight? It literally looks like glitter is falling from the sky.  This slime activity reminds me of that exactly. How fun!

Ocean Slime  (pictured)
The ocean is a vast, shiny place that is full of fun creatures. This slime activity is perfect for studying ocean animals because I can’t think of anything better than having slime play the ocean!

Mermaid Slime (pictured)
Your little mermaids will LOVE this slime. The colors and sparkle are just like a mermaid tail and the confetti is such fun shapes there is no doubt you’ll have smiling mermaids in no time!

Unicorn Snot Slime
Do you have a unicorn lover? The colors of this Unicorn Snot is so bright and the sparkles are so fun. It might even turn us all into unicorns!

Polka Dot Slime
Slime inside slime? YES! This sensory play is an experience all in itself. There is colors and white, stretchy slime and balls of slime. This is pure awesomeness!

Jungle Slime  (pictured)
Are you studying jungle animals? This slime recipe looks like it came straight from the jungle floor and is the perfect ‘home’ for jungle animal friends.

Zebra Slime  (pictured)
I love how this slime recipe actually looks like zebra stripes. It is super easy to put together but kids will love how real it seems to be!

Frog Egg Slime
Frog eggs are tiny and in a big bunch together. This slime, with just a little extra prep, makes slime that looks exactly like frog eggs and it is AWESOME!

Galaxy Slime  (pictured)
Starry Night Slime (pictured)
Astronomy is a fascinating part of STEM. This night sky slime recipe looks like it came straight from the sky. The stars sparkle as bright as the real thing!

Nebula Slime
This Nebula slime recipe is completely fascinating. It is so sparkly and colorful that it will no doubt be a hit! 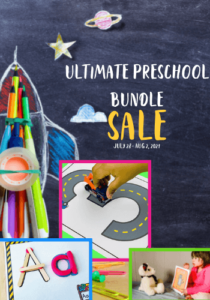 Hurry! They disappear on August 2nd! 25+ resources by your favorite early childhood experts!